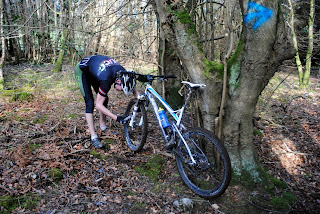 I was a bit apprehensive about this one. I had visions of being left behind on the first lap, had I done enough hard training, miles, did I turn on Strava enough?

The course down there is truly spectacular. Maybe the best race course I've ever ridden? It was made up of pretty much all technical singletrack with a savage switchback climb, loads of well made boardwalk.

After a pre ride, I went about trying to sell my Squeezy stock. I learnt a lot about what people expect and are looking for. I'm definitely going to change my tactics for next time. What got me thinking was, I don't go into Spar and say, "I might buy that new Cadburys bar, but I'll need a sample one before considering it" But I guess that's the nature of a new brand.

Anyway, I got a great start and was sitting comfortably in the top 3 up the first climb. I was feeling really good on the singletrack and was actually really enjoying it! I had decided on the pre ride that I was going to take a sketchy ladder drop that would save me a few seconds. On my second time down it, I think my front tyre burped a bit of air. Not the end of the world I thought, it's just a bit soft but rides okayish. As the lap progressed, I lost a place due to nursing the bike down the descent. I pulled over to find the tyre totally deflated and my co2/foam shit did absolutely nothing. That put an end to my first big race of the season, damn.

I've been fairly lucky/ well prepared for mechanicals over the years so I can't complain too much. I really should have had a proper Co2 which would have saved my race. Lesson learned! I did a savage spin out to the mountains from home today- I'm feeling good and dying to rip the face off Bunclody!
Posted by Stephen at 3:31 PM 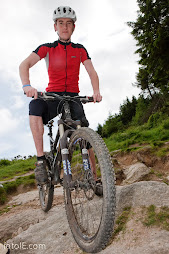